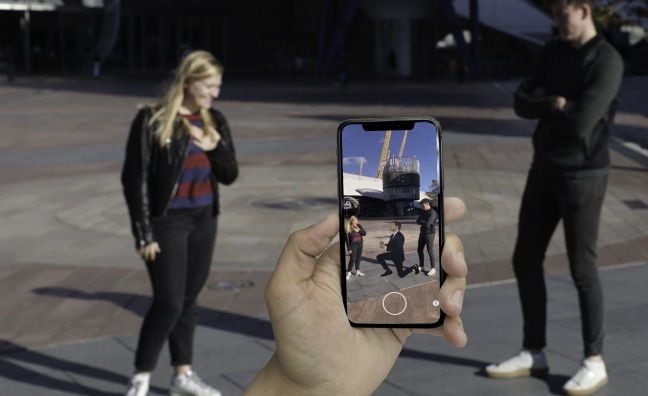 Michael Bublé fans can now download an augmented reality version of the singer, giving them the ability to take selfies and videos with a 3D video avatar of the star on their smartphones.

O2 staged a hi-tech film shoot with the star ahead of his gig at The O2 on Saturday. Volumetric 3D capture technology recorded the shape and detail from every angle to create a fully 3D video avatar of Bublé.

Nina Bibby, CMO of O2 said: “The gig experience doesn’t just begin when fans reach the venue; the excitement builds long before and lasts long after. So we’re using volumetric capture technology to bring our customers and fans closer to an artist than ever before – with a totally unique application of augmented reality. Fans lucky enough to be heading to see Michael Bublé as part of O2 Live this weekend will be able to take selfies and videos with a 3D avatar of the star as they travel to venue or when they’re in the arena. But those without tickets can still download the app and take their very own selfies, wherever they are.”

Fans can pose with the the singer's avatar via a choice of four unique experiences. After appearing in a puff of smoke on the smartphone screen, the avatar either beckons you over, kisses you or proposes on one knee - with a twist. The avatar can also be pivoted, scaled and rotated depending on the surrounding environment.

Bublé said: “I’ve been working with O2 to bring something totally new and unique to my fans. From tomorrow, you’ll be able to take a selfie with me – at home, at work or in the pub - using the latest augmented reality technology. All you need to do is download The O2 app and snap away. It’s nearly as good as the real thing – I can’t wait to hear what everyone thinks!”

The O2 app can be downloaded or updated from both the Play and iOS app stores. Fans will have access to one of the experiences and can then opt to download the remaining experiences, while a special video will be made available following Saturday’s gig.

We’d love to talk! Drop us a message below and one of the team will get right back to you.